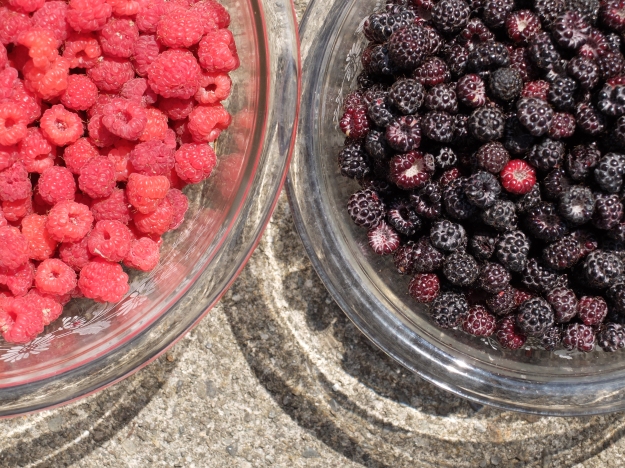 I’ve been picking raspberries and blackcaps all month, and they’re such a treat!

Okay, I admit it. In years past, when I’ve gone over to the big, old, sprawling raspberry bush, I’ve picked straight into my mouth.

But this year was different. It was a little easier than in past years to get into the center of the huge, old bush, so I could get more berries, and I decided to pick into a container. I wasn’t sure what kind I should use, but I settled on one of those big plastic mugs with a handle, the kind you get at the gas station and fill up with soda.

Why this, and not a bowl, you ask? The key word is HANDLE. It was easy to put my fingers through the handle and grip the mug with one hand, as I made my way over uneven ground, through thorny brambles, and along the foundation of an old chicken coop, all while wearing a pair of old rubber fishing boots. I would have been very upset if I dropped a container full of hard-earned berries, especially since it was blazing, swelteringly hot, which tends to make me…cranky. The mug worked out really well.

This year, for the first time, I also discovered a good place to pick blackcaps! It’s because of the fawn, you know. We saw a beautiful baby deer, but it was sick and died. And no, I really don’t want to talk about it, or it’ll make me sad. But, looking on the bright side, a good thing to come out of finding the fawn was it was in an area where I rarely go. As I was snooping around this spot, I discovered there were lots of blackcaps, and they were larger and more plentiful than on the other stray brambles I’ve found in random spots.

Now, around here, blackcaps grow wild, without being purposefully planted, but most of them are kind of small and hard to come by. I think the blackcaps in this newly discovered area are larger because there’s a lot of afternoon shade, maybe? I’m not quite certain. Picking blackcaps in this shady area is a lot more pleasant than picking raspberries in the full sun, that’s for sure!

So, the first day I went berry picking, I got a full mug of raspberries, and a partial mug of blackcaps. I poured them into two clear Pyrex Colonial Mist bowls, without washing them, and put them in the fridge for later. (It’s best to rinse your berries right before you use them, they last longer this way.)

I bought a small lemon poundcake (it’s way too hot to bake right now), a can of spray whipped cream, and we enjoyed some berries that way.

But next time I picked berries, I bought a beautiful vanilla cream brioche from Aldi, and made my own whipped cream! I’ve done this before, but it’s been quite awhile.

How To Make Homemade Whipped Cream
It’s pretty simple, really. Chill your mixing bowl and whisk first. Use one cup of heavy whipping cream, two tablespoons of sugar, and a dash of vanilla. Of course, you can use electric beaters. I like to do things the old-fashioned way, though, so I whisked the cream by hand. It took about 15 minutes, and then I had a small amount of glorious, fresh whipped cream!

I chose a pretty little plate and put a slice of brioche on it. Then I spooned on several clouds of white, pillowy, whipped cream, and topped it all with freshly washed raspberries.

I even broke out the good silverware and ate it with an Oneida Evening Star dessert fork!

It was such a treat on a hot July evening, and made the scratches, sunburn, and sweat all worth it. 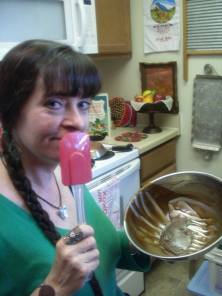