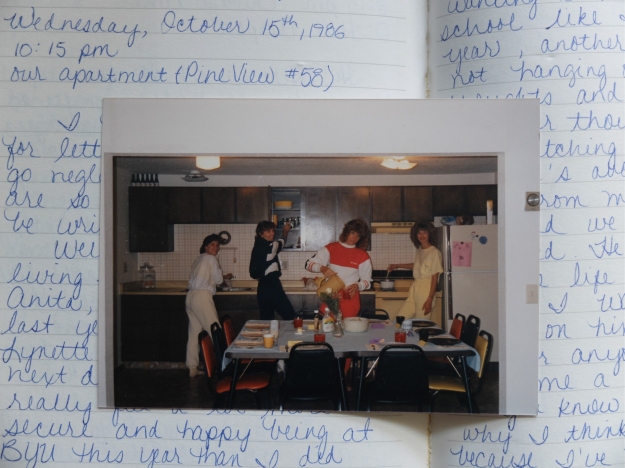 My second year of college, I moved off campus with my best friends, The Rockets.

We were anxious to escape the lowly freshman scene at the campus dorms, but we’d waited ’til last minute to find a new place. Luckily, Pine View still had openings.

I don’t think I went with the other girls to look at the apartment, but I’d been there before, since we’d known some guys who lived there our freshman year.

We’d lost two of our freshman roommates by this time. Nancy decided to move home to California, and Traci found new roommates.

So it was Anita, Julie, Lori, and me, and we picked up our friend Lynette, who lived in the apartment next door. We all went home for summer vacation, to work and spend time with our families, and then returned to Provo in the fall.

Pine View was located on a very busy street called University Avenue, and with our third-floor apartment facing the street, you could perch on the end of the couch and snoop through the living room’s large picture window, out over the road, watching the cars, and more importantly, checking to see exactly when your favorite people were coming home from classes.

It was a large apartment with three bedrooms, and we now had TWO bathrooms, which was especially great when we were all trying to get ready for church on Sunday mornings, last-minute, after a late Saturday night, dancing at The Palace.

When you first entered the apartment, there was a large kitchen to the right, open to the living room on the left. In our kitchen, we had a sink and fridge and harvest gold stove. I don’t remember having a microwave, and we didn’t have a dishwasher, either.

In the kitchen was a door which led to a utility closet where the vacuum was housed. It was always breaking down, but Anita was unexpectedly good at fixing it.

We called our linoleum kitchen floor Puke Chunk, because of the random pattern of different-colored…well, chunks. I wish I had a photo to show you!

The picture you see above, of the skinny, sweat-panted girls, is the group of Rockets we assembled, year two. Minus me, because I’m taking the picture, of course.

Freshman year I’d splurged at University Mall, and bought a great camera, a Nikon point-and-shoot. I still remember it cost $50, and that put a huge dent in my food budget, but it’s a decision I’ll never regret.

Oh, how I love my cameras.

We lived in sweat pants that year. I’m pretty sure we didn’t get away with wearing them to class, but the second we got home, off came the uncomfortable pants with zippers, and on went the sweats.

Anyways, this particular night you see in the photo above, in October 1986, we’d invited a group of guys over for dinner. There were five of us and five of them.

We didn’t have enough room for everyone at our table, which normally seated six, so we borrowed the kitchen table from the apartment across the hall, and pushed it together with our own kitchen table.

We also borrowed four of their chairs. Look at the colorful array of yellow, orange, and black! I wish I could remember what we ate that night, but I didn’t write it down in my journal this time.

I chuckle to myself now, looking at the photo, seeing the motley assortment of mismatched cups and plates. But really, what apartment of college students has service for ten, anyways? No one I know.

I remember, sometimes we stored things in that space up above the cabinets. One time at Halloween, we all went to a fast-food joint and got kids meals, then saved our plastic pumpkin buckets and put them up there, as a Halloween decoration.

I also remember another time when there was a row of Lori’s coveted jars of Bear Lake raspberries stored up above the cabinets, tantalizing and tempting and tormenting us.

Her mother canned them, and we loved when she opened up a jar of raspberries! We sat down at the kitchen table and ate them straight from the bottle, right down to every last drop of the sweet sweet syrup.

I don’t remember doing too much cooking for myself in this kitchen. I lived on Lynn Wilson bean-and-cheese burritos, Honey Nut Cheerios, and canned soup. No wonder I was so skinny back then!

We had many happy times in this apartment, when it was the five of us.

It was in this kitchen, on 6 January 1987, where I met the young man who would later become my husband, when he arrived to go dancing with us, along with our mutual friend, Wendell.

I still remember what I was wearing: a white t-shirt with a V of fringe, blue stonewashed jeans, and white boots with fringe, which I’d borrowed from Lynette and crammed my feet into. (She wore a half-size smaller than I did.)

He was wearing a purple henley shirt, jeans, and red high-top sneakers…

We had a lot of fun in this apartment, doing crazy stuff like standing on the furniture and dancing, ordering pepperoni pizza from Dominos and splitting the cost, and watching Adam Curry’s MTV countdown every day (I think it was on at 4 pm).

There were always visitors coming and going, and I’m sure we made a LOT of noise, blaring old-school rap and heavy metal tunes. In retrospect, I feel a bit sorry for our neighbors.

But it was the best of times.

We lived in this apartment for two school years, including one summer, up until we forgot to renew our lease in time, and they rented the place to another set of girls. Then we had to move downstairs, to another apartment, and pretty much overnight.

Why in the world the office didn’t just rent the downstairs apartment to the new girls, I’ll never know, and I’m pretty sure we didn’t even think to ask.

We just hauled our stuff down the stairs, and set up housekeeping in the new apartment. But that’s another blog, for another day.