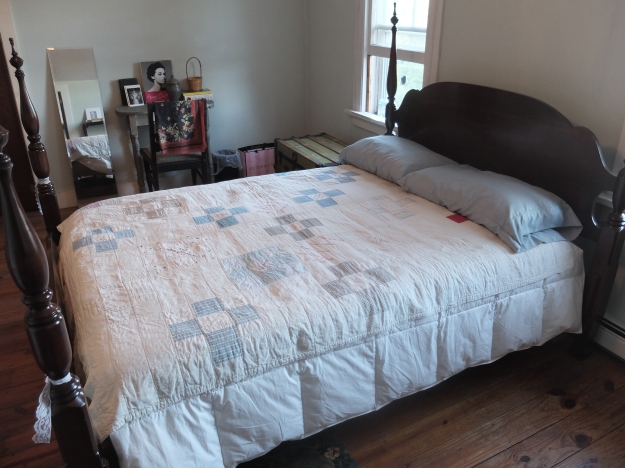 Valma. She finished the quilt 93 years ago, she did.

She and two friends, Del and Pearl, carefully embroidered the just off-center patch in pink floss with their names, the completion date of March 20, 1923, and her group’s initials, SCG. Then, perhaps (let your imagination enter, stage left) it was sold or auctioned for benefit.

They made the quilt that I, Valerie, I slept under three nights ago, on 17 July 2016, while still on vacation at my childhood home. I marveled at the quilt’s comforting softness and fine, impeccable condition, with no rips or tears or stains.

I slept in a beautiful four-poster bed, the nicest one I’ve ever had, chosen by my sister Cheri. I slept upstairs in a bedroom which faces warmly west, with orangey pumpkin-pine floors, the Winter Bedroom of the V House, located in Columbia County, New York, God’s gorgeously green upstate.

The house was built at the dreary beginning of the Great Depression, in 1930, built by hard-working Germans, the V Family, on land purchased from the nearby S Family, both lots originally part of the B Farm. My dad says they used scrap from Meltz Lumber, a local lot, and finished the upstairs much later than the downstairs, adding two large dormers and reversing the staircase to make a separate apartment with its own entryway.

Thank goodness, downstairs Mrs. V had a cheerful yellow Formica kitchen counter to look at and wipe down carefully, and an immaculate white porcelain sink with large drainboards on either side (and a brass drain), at which to wash her dishes.

She also had a neat kitchen floor to sweep and mop, made of sturdy linoleum squares of white, with the palest-of-pale chunks of pink and green and gold sparkly flecks.

But more about that later, right now let’s focus on my precious quilt…

I remember when I first saw it.

I was living in Provo, Utah and bored out of my mind, having graduated college and watched all my favorite roommates, The Rockets, move away and leave me. To pass the time on weekends off, I liked to make trips up to Salt Lake City to shop for frivolous things like cowboy boots and antiques.

Pretty things to try and fill the gigantic hole in my heart at having been left behind by my best friends, and to kill the pain of not yet being married and having the children I always knew I wanted, a family of my own.

When I stumbled upon the quilt in a stack of bed linens in an armoire in an antique shop in Midvale, I knew, I just KNEW, it had to be mine. I kind of started to sweat a bit, because It was around $250, and, even though I had a good job, I really couldn’t afford it, at least not all at once.

But I simply couldn’t leave that place without making it mine. The shop’s owner let me make payments, a layaway of sorts. And so, $20 here and $25 there, I slowly made it mine. I was grateful and gleeful upon making the final payment, and took the quilt carefully home, packing it away for someday.

The reason I had to have the quilt was the signatures, of course. Each nine-patch was signed and dated with red or pink embroidery floss, covering carefully penciled script, dating even further back, to 1921. The squares were made of simple checked and striped or polka-dotted material, bordered by ecru flour sack material. 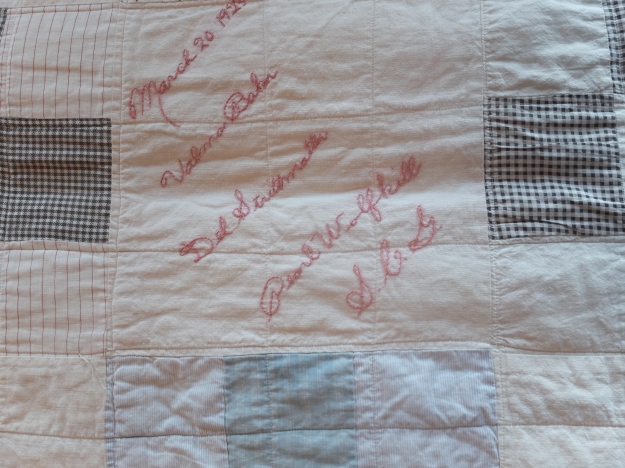 When I sleep under this quilt I feel of these long-gone ladies’ love and creativity, industry, frugality, and sheer determination.

To create beauty out of something useful and utilitarian. To use the contents of a sack of flour to make loaves of soul-sustaining bread and fluffy celebration cakes and dozens of oatmeal raisin cookies, and then to be provident enough to save the sacks, recycling pioneers, and cut them into squares, which became nine-patches, which became my beautiful quilt.

The quilt I slept under in the Winter Bedroom of my childhood home in July of 2016. My beloved boys, a mother after all, they slept under the eaves of the twin bedrooms at the other end of the house.

And Thing 1 slept under a new quilt made with imagination and love by his Aunt Cheri.

[AUTHOR’S NOTE]
The last photo, Popcorn Vampire, did not appear in the original blog. It was added to the post on 27 October 2017. I’ve also made extensive edits since the original posting. 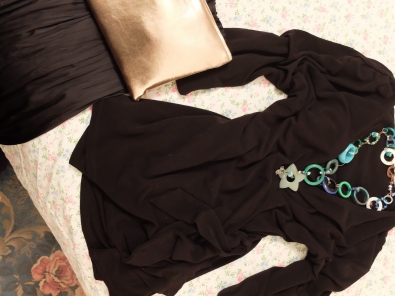